What frightens me is not the oppression of tyrants, but the indifference of peoples.
(Martin Luther King, 1929-1968)

The first forms of life on our planet appeared 540 million years ago.
Seashells are one of the oldest forms of animal life.

Below is the chronology of the main forms of life with the 12 geological eras
(Cambrian, Ordovician, Silurian, Devonian, Carboniferous, Permian, Triassic, Jurassic, Cretaceous, Paleogene, Neogene, Holocene(**)).

(**)We are currently living in the Holocene era which began in 9700 BC. The Anthropocene period (or Human era), which began in 1610 when the Old World met the New World, was recently added.

There were 5 massive extinctions of species in -445, -370, -248, -201 and -66 million years ago.
The impact of human activity on the climate, ecosystems and the overexploitation of natural resources has triggered what scientists suspect as the sixth mass extinction of our planet. ☹

1 ➫ Classification of seashells in the animal kingdom

In the animal kingdom, seashells are mainly found in 3 classes of the phylum molluscs (which includes 8 in total)

1.1 ➫ Branch tree of the animal world (seashells are in the spiralians branch, dinosaurs and other extinct species are not represented)

(negative numbers in parentheses indicate the age, in millions of years, of the oldest fossils in the branch). 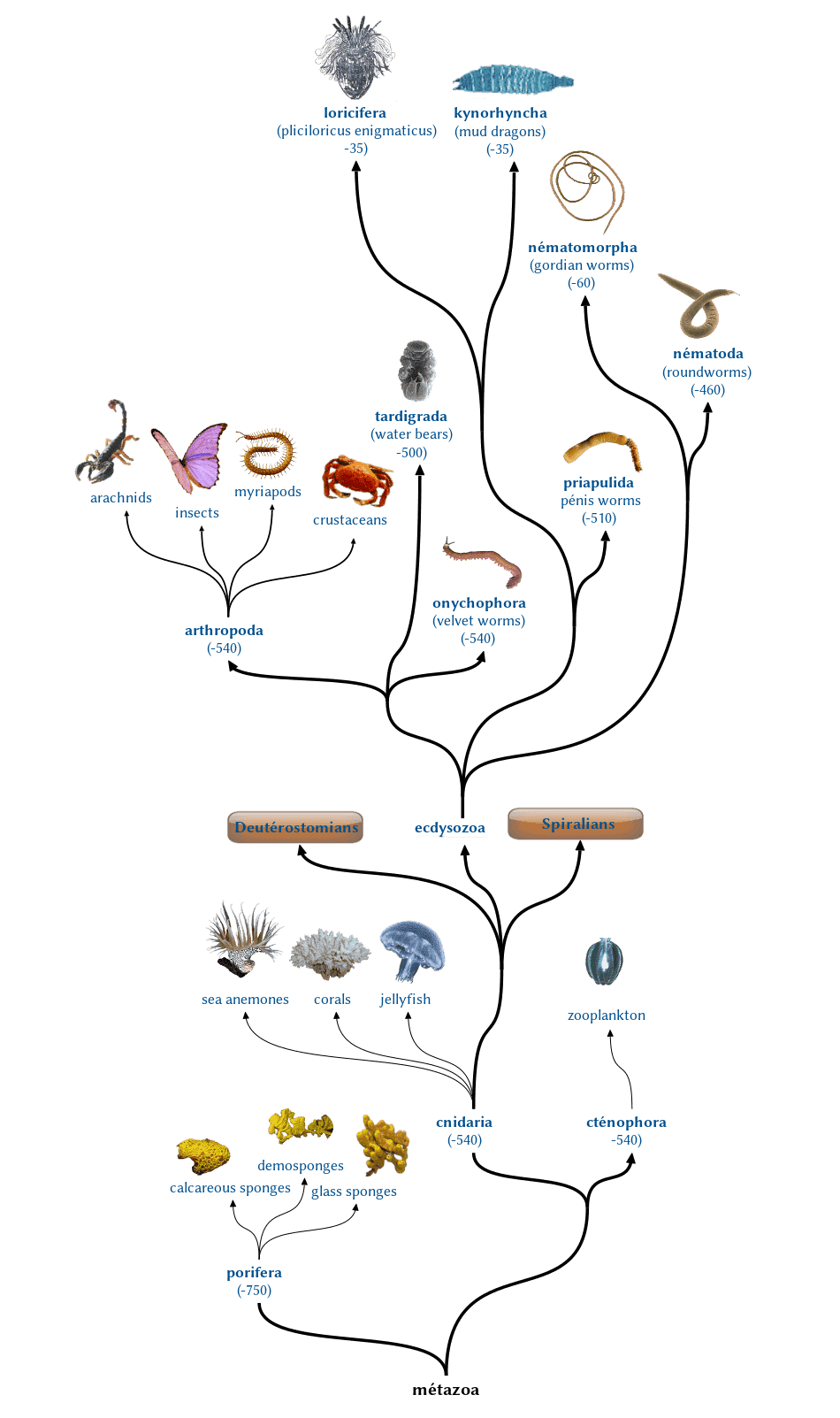 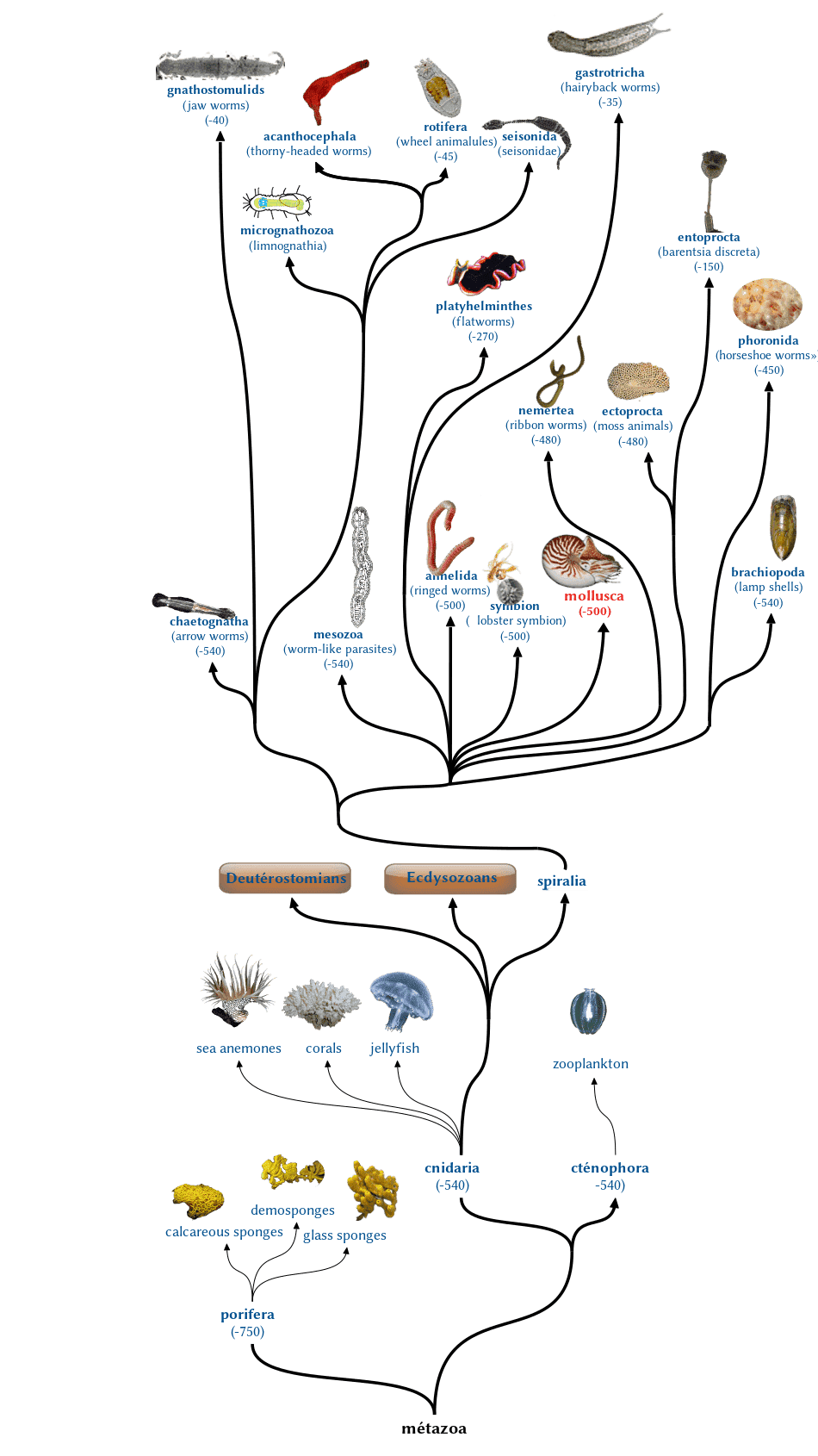 An old classification of the animal kingdom distinguishes:

1.2 ➫ List of the 33 branches of the animal kingdom

When we speak of seashells we generally think of the shell, forgetting that it is first of all a living animal (a mollusk) which inhabited this shell.

Molluscs are invertebrate animals whose bodies include a visceral sac (internal organs), a mantle, a pallial cavity and a radula (except bivalves).

The mantle forms a sort of cape draping the shell of the animal. It has the crucial task of containing visceral mass. For conchifers, the mantle has another function: to build and maintain the shell.

The pallial cavity is a space formed by the folds of the mantle. For most molluscs it contains the gills and acts as a respiratory chamber. In bivalves it is used to suck food. In cephalopods and scallops it is also a locomotion organ.

Mollusc siphons are tube-like structures in which water circulates. Water flow is used for one or more purposes such as locomotion, feeding, respiration, and reproduction.

Most marine gastropods have a siphon. Some bivalves do not have a siphon, for others the siphons are always paired. In cephalopods, there is a single siphon or funnel called the hyponome.

Molluscs are the only living organisms with a radula, it is a preponderant organ for their classification. It's a kind of tongue bristling with micro-teeth. It allows the animal to feed by scraping micro-algae (or plants) and bringing them towards the mouth like a conveyor belt.

A few rare gastropods do not have a radula: the Tethydidae , the genus Clathromangelia (family Clathurellidae) and, in terrestrial environment, the species Careoradula perelegans (family Streptaxidae). Most cephalopods have a radula with the exception of the spirulae. Bivalves don't.

The radula consists of several transverse rows of teeth.

The number of rows, the shapes and the arrangement of teeth can characterize a whole superfamily (Epitonioidea : ptenoglossa radula).

The Sacoglossa order characterizes molluscs whose radula has only one row of teeth.

A row can have three types of teeth:

There are seven types of radula depending on the configuration of these three types of teeth:

docoglossa ou stereoglossa: the most primitive form, the central tooth can sometimes be absent, 3 lateral teeth (the most external dominant) and 3 marginal teeth.

rhipidoglossa: a central tooth, five lateral teeth (the most external sometimes dominant) and a large number of marginal teeth acting as a kind of broom to recover the remaining food debris.

hystrichoglossa: a central tooth , 27+14 lateral teeth and a large number of marginal teeth.

ptenoglossa: no central or lateral tooth but a large number of marginal teeth.

taenioglossa: seven teeth in total including a central tooth, a lateral tooth and two marginal teeth (on both sides) or 2x (1 + 2) +1.

stenoglossa or rachiglossa: three teeth in total, one central tooth and two lateral teeth (sometimes only one central tooth). This type of radula makes it possible to dig powerfully into the shell of a prey and, using acid secretion, to pierce it.

toxoglossa: a very small central tooth (if not at all) and two long pointed side teeth with barbs. They contain a channel for the venom and work separately. As their connection to the base of the radula is very loose, they can be ejected like a harpoon on a prey. The radula of certain Conidae (Gastridium geographus, Cylinder textile) contains a venom that is lethal to humans.

The different types of radula show the evolution of gastropods in their mode of feeding: herbivores, detritivores, scavengers or carnivores. Scraping algae requires many teeth, according to the first three types. Carnivorous types need fewer teeth, especially lateral and marginal teeth. The ptenoglossus type is located between the two extremes and is typical of gastropods parasitic on polyps.

Carnivorous gastropods use different techniques to capture their prey:

bivalves feed on phytoplankton and microorganisms by filtering the water.

All cephalopods are carnivorous. They have a two-part beak and most have a radula, although it is small in most octopuses and completely absent in Spirula. They feed by capturing prey with their tentacles, then grab them into their mouths. They have a mixture of toxic digestive juices, some of which are made by symbiotic algae, which they eject from their salivary glands onto their captured prey. These juices separate the flesh of their prey from the shell.

To create their shells, the seashells acquire the elements (calcium, carbon and oxygen) from their food but also from the water around them.

These elements are taken up from the blood stream by specialized cells in the mantle, they are then combined with specific proteins which produce secretion on the outer surface of the mantle.

These secretions are then deposited by the movements of the mantle on the surface of the shell, harden quickly and thus make the shell enlarge.

The formation of the shell is more than a simple continuous addition of material to the edge of the opening. Mollusc shells are complex structures made up of three layers, each created separately.

The first two layers are made by the front edge of the mantle, at the outer lips of the shell opening.

NB: The mantle of cowries secretes a fourth layer above the periostracum: the epiostracum which gives them this smooth and shiny appearance.

The precise description of a shell uses a very specific lexicon that it is important to know in order to fully understand the descriptive sheets for each family.